The Great Mosque of Djenné (Arabic: الجامع الكبير في جينيه) is a large brick or adobe building in the Sudano-Sahelian architectural style. The mosque is located in the city of Djenné, Mali, on the flood plain of the Bani River. The first mosque on the site was built around the 13th century, but the current structure dates from 1907. As well as being the centre of the community of Djenné, it is one of the most famous landmarks in Africa. Along with the "Old Towns of Djenné" it was designated a World Heritage Site by UNESCO in 1988.

The actual date of construction of the first mosque in Djenné is unknown, but dates as early as 1200 and as late as 1330 have been suggested.[1] The earliest document mentioning the mosque is Abd al-Sadi's Tarikh al-Sudan which gives the early history, presumably from the oral tradition as it existed in the mid-seventeenth century. The Tarikh states that a Sultan Kunburu became a Muslim and had his palace pulled down and the site turned into a mosque. He built another palace for himself near the mosque on the east side.[2] His immediate successor built the towers of the mosque while the following Sultan built the surrounding wall.[3]

There is no other written information on the Great Mosque until the French explorer René Caillié visited Djenné in 1828, years after it had been allowed to fall into ruin, and wrote "In Jenné is a mosque built of earth, surmounted by two massive but not high towers; it is rudely constructed, though very large. It is abandoned to thousands of swallows, which build their nests in it. This occasions a very disagreeable smell, to avoid which, the custom of saying prayers in a small outer court has become common."[4]

Photo taken by Albert Rousseau in 1893–4

Photo taken by Edmond Fortier in 1906

Seku Amadu's mosque from the southwest as it looked in 1895. From Félix Dubois' Tombouctou la Mystérieuse.

Ten years before René Caillié's visit, the Fulani leader Seku Amadu had launched his jihad and conquered the town. Seku Amadu appears to have disapproved of the existing mosque and allowed it to fall into disrepair. This would have been the building that Caillié saw. Seku Amadu had also closed all the small neighbourhood mosques.[5] Between 1834 and 1836, Seku Amadu built a new mosque to the east of the existing mosque on the site of the former palace. The new mosque was a large, low building lacking any towers or ornamentation.[6] French forces led by Louis Archinard captured Djenné in April 1893. Soon after, the French journalist Félix Dubois visited the town and described the ruins of the original mosque.[7] At the time of his visit, the interior of the ruined mosque was being used as a cemetery.[8] In his 1897 book, Tombouctou la Mystérieuse (Timbuktu the mysterious), Dubois provides a plan and a drawing as to how he imagined the mosque looked before being abandoned.[9]

In 1906, the French administration in the town arranged for the original mosque to be rebuilt and at the same time for a school to be constructed on the site of Seku Amadu's mosque. The rebuilding was completed in 1907 using forced labour under the direction of Ismaila Traoré, head of Djenné's guild of masons. From photographs taken at the time,[1] it appears the position of at least some of the outer walls follows those of the original mosque but it is unclear as to whether the columns supporting the roof kept to the previous arrangement. What was almost certainly novel in the rebuilt mosque was the symmetric arrangement of three large towers in the qibla wall. There has been debate as to what extent the design of the rebuilt mosque was subject to French influence.[1]

The current mosque, photographed in 2003, behind the town's market

Dubois revisited Djenné in 1910 and was shocked by the new building. He believed that the French colonial administration were responsible for the design and wrote that it looked like a cross between a hedgehog and a church organ. He thought that the cones made the building resemble a baroque temple dedicated to the god of suppositories.[10] By contrast, Jean-Louis Bourgeois has argued that the French had little influence except perhaps for the internal arches and that the design is "basically African."[11]

French ethnologist Michel Leiris, in his account of travelling through Mali in 1931, states that the new mosque is indeed the work of Europeans. He also says that local people were so unhappy with the new building that they refused to clean it, only doing so when threatened with prison.[12]

Jean-Louis Bourgeois however, recorded that the rebuilt mosque was constructed by Djenné's traditional local guild of masons, traditionally responsible for the building and maintenance of the town's original mosque and of Djenné's other buildings, using traditional techniques and with minimal French involvement.[13]

The terrace in front of the eastern wall includes two tombs. The larger tomb to the south contains the remains of Almany Ismaïla, an important imam of the 18th century.[14] Early in the French colonial period, a pond located on the eastern side of the mosque was filled with earth to create the open area that is now used for the weekly market.[15]

Electrical wiring and indoor plumbing have been added to many mosques in Mali. In some cases, the original surfaces of a mosque have even been tiled over, destroying its historical appearance and in some cases compromising the building's structural integrity. While the Great Mosque has been equipped with a loudspeaker system, the citizens of Djenné have resisted modernization in favor of the building's historical integrity. Many historical preservationists have praised the community's preservation effort, and interest in this aspect of the building grew in the 1990s.[citation needed]

In 1996, Vogue magazine held a fashion shoot inside the mosque. Vogue's pictures of scantily-dressed women outraged local opinion, and as a result, non-Muslims have been banned from entering the mosque ever since.[16] The Mosque is seen in the 2005 film Sahara. 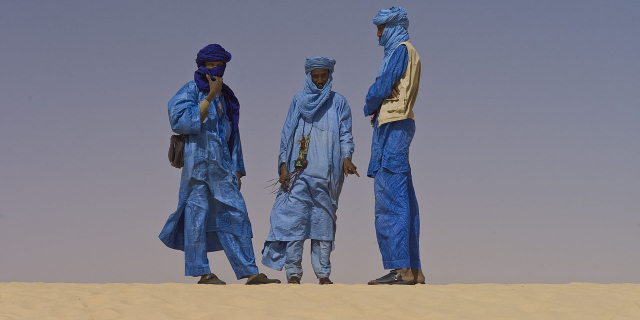 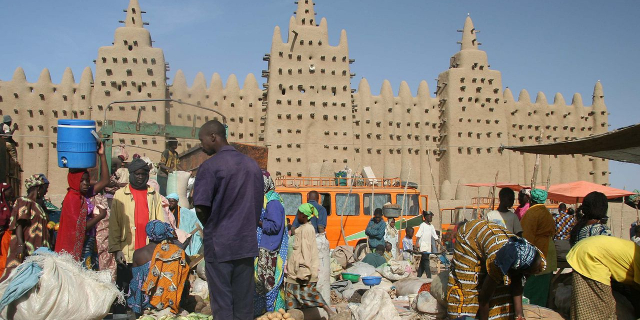 Where can you sleep near Great Mosque of Djenné ?

What can you do near Great Mosque of Djenné ? 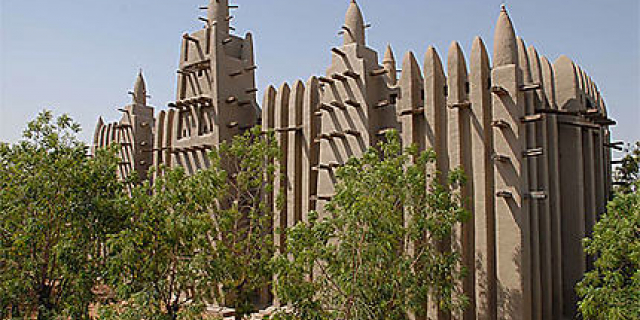 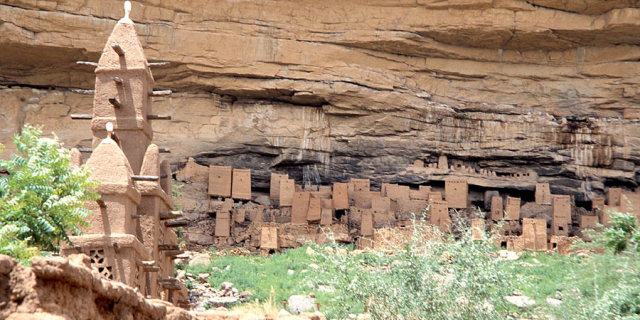 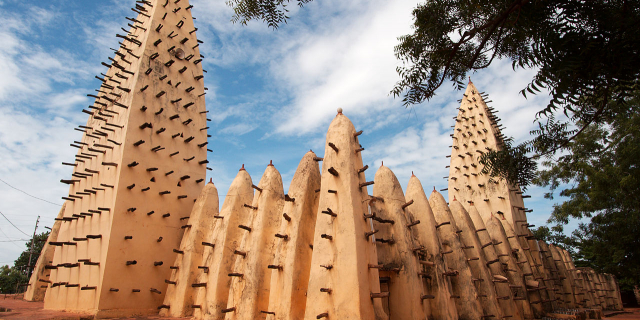 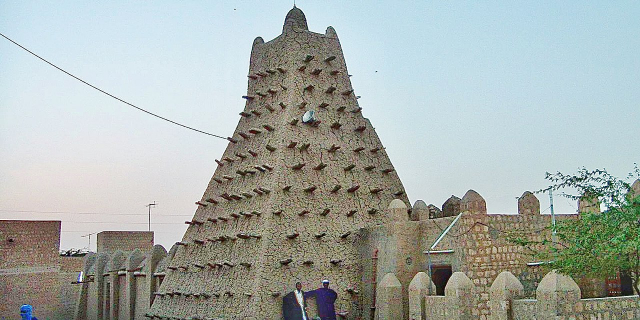 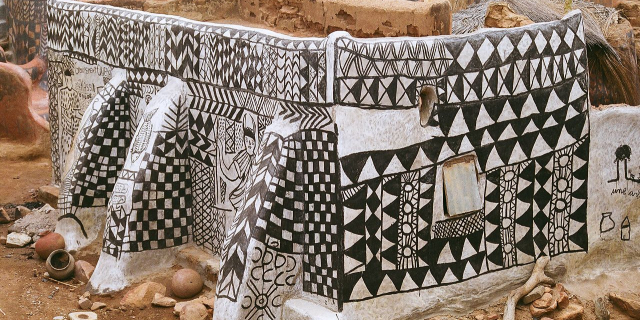 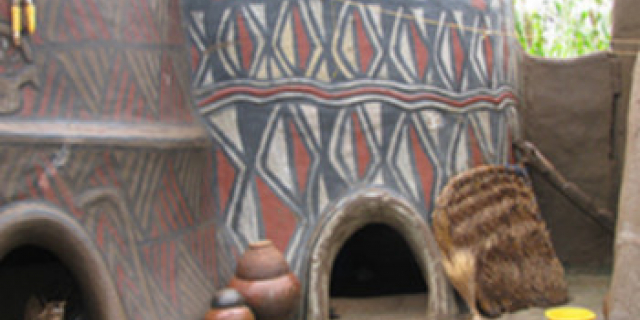 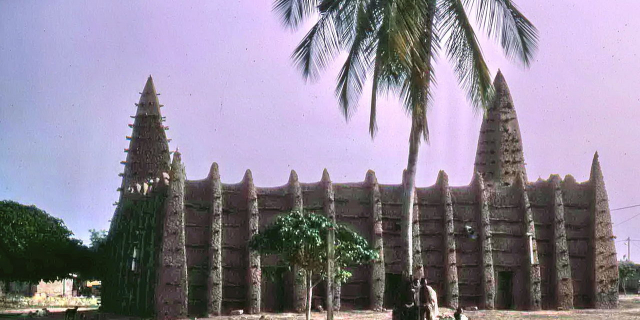 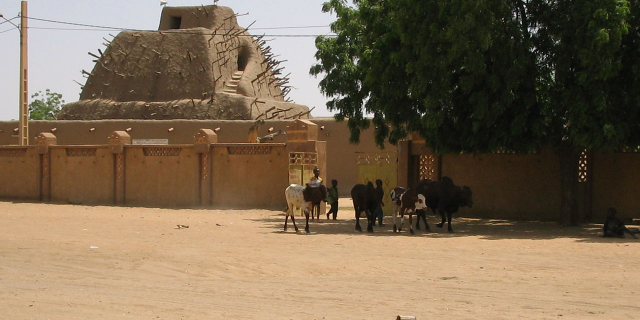 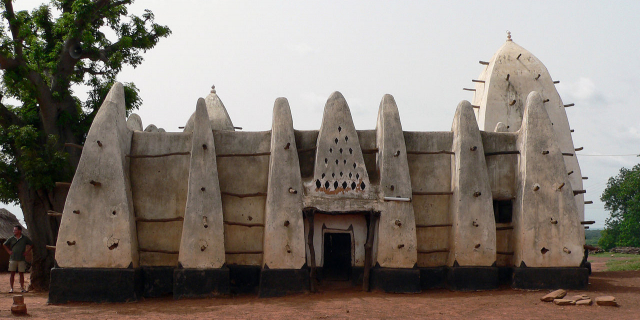 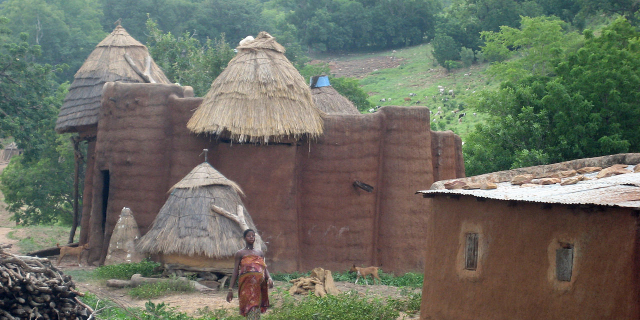 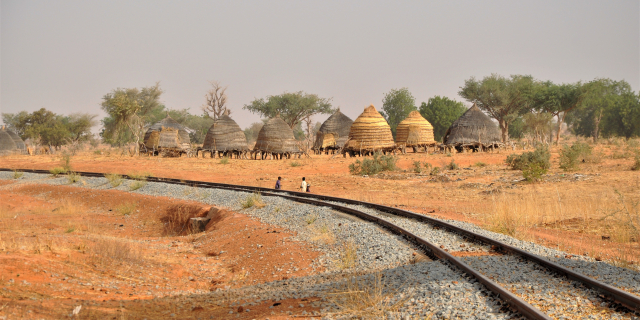 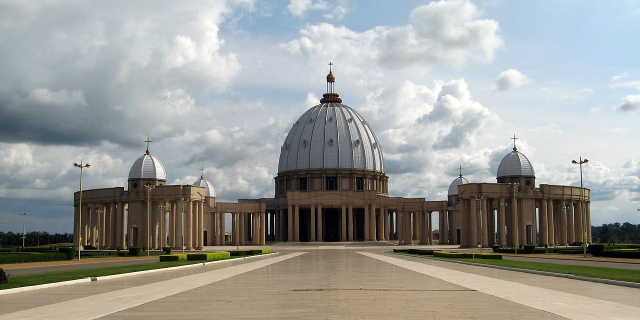 Basilica of Our Lady of Peace 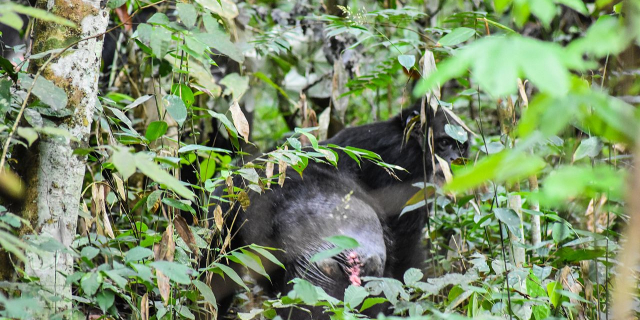 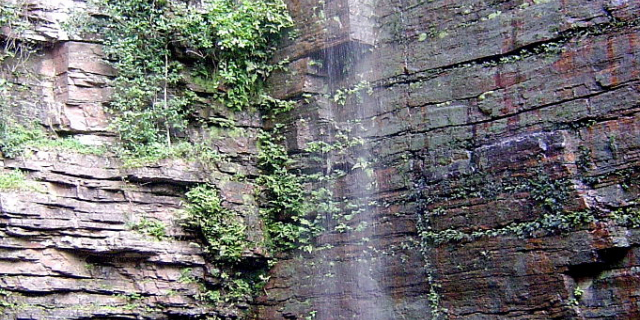 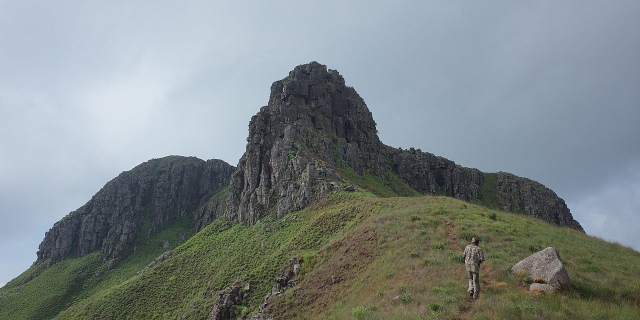 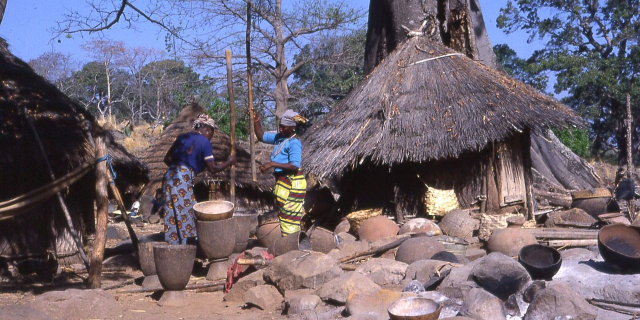